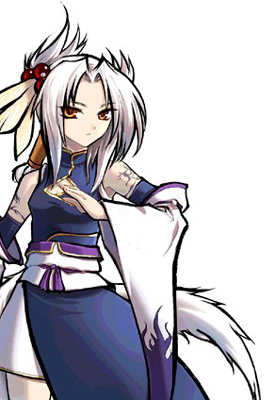 Kunagi is Rouga Zanma's strong-willed childhood friend and fiancée. She's blunt and direct with everyone, Rouga included, and that contributes to her difficulties in getting along with most people. However, so far as Rouga and her friends are concerned, she has both a soft spot for them and the utmost faith in their abilities.

Kunagi spins and slashes two times, can be cancelled in between the slashes. Hits Mid. Air unblockable. The second hit launches the opponent on counterhit, though chances of actually counterhitting with the second hit are very low.

Kunagi slides and slashes, sweeping the opponent, can be special cancelled on hit and block. Air-unblockable.

Kunagi spins in the air, slashing with both hands. Can hit twice. Can be cancelled into any aerial move. Can cross-up.

Kunagi spins and slashes horizontally. Jump cancellable and special cancellable on hit. On counter hit it launches the opponent.

Kirisaku Mono (Slasher) (j)(236A/B)
damage - proration
On the ground, Kunagi flings a shockwave along the floor. In the air, Kunagi tosses a disc at a 45-degree downward angle.

Goumagetsu (Conquering Devil Moon) (j)(623A/B)
damage - proration
Kunagi jumps into the air with a slash, encircling herself with a crescent.

Aoki Kage: Shinsoku (Blue Shadow: Godspeed) (j)(22A/B/C)
j.22C: damage - proration
On the ground, Kunagi teleports in one of three ways relative to the opponent. In the air, Kunagi falls to the ground.

Shuntensatsu (Instant Heavenly Killing) (41236ABC during Big Bang Mode)
damage - proration
Kunagi teleports above and behind the opponent, attacking with a large crescent slash from above. On hit, it continues into a barrage of aerial dashing attacks ending with a hard knockdown.

Kunagi has a surprising amount of damage potential for being such an archetypical pixie type of character; however, what's more scary than her damage is her okizeme. Unfortunately, there's only two ways to get a hard knockdown with enough time to setup oki mixup: throw and j.22c combo ender.

Her throw is possibly one of the best out there because of two reasons.

Being able to cancel throw recovery into one of your teleports will quickly become your best friend. From 22b you have enough time to run quick oki mixups such as superjump > fastfall ambiguous crossup, 236b or 214a/b safe meaty, 2a low meaty or 2a whiff into throw, etc. From 22c you're spaced perfectly for IAD j.c (sj>IAD for crossup), 421a>c j.236a for very strong combo starter, 236a safe meaty, or 214a spaced just perfect to crossup combo. You've got a lot of options coupled with strong cornering potential, so be sure to get some use out of it.

Because of Kunagi's absurd amount of options, the general rule of thumb is to go for the hard knockdown to retain momentum and mixup potential. The exception is, of course, if you have the opponent at 30% life or less, in which case go for the certain kill with the extra loop into super. Thankfully, if you have the opponent in the corner, you can opt for the Corner Super Combo to gain hefty bonus damage and still retain your ability to get the j.22c hard knockdown.

Ending combos with [421a>c j.22c] is the only surefire way to get decent damage while retaining the hard knockdown. You recover right next to the opponent with all the time you could want to set up meaty, mixup, or just dash their body into a corner. Be wary of wakeup reversals, especially when the opponent is starting to get desperate (cornered, low life). It might be smart to throw out some safe meaties, to "teach" them that reversals are a bad idea, before running some more risky mixups or going in for high damage combo starters. If you're doing it right, one knockdown combo will just chain into a mixup into another knockdown combo until they're finished. If you're doing it wrong, you should have plenty of meter to counter/burst and try again. Either way, pay attention to how your opponent reacts to everything and abuse their weaknesses as a player.

The only other good reason to use a non-knockdown combo, besides getting the guaranteed kill, is if you happen to land a really high damage starter like [421a>c j.236a (land) 5a] against a grounded opponent and chain into the higher damage Close Range Combo. The level of damage you get off of something like that is immense, registering over 4k damage even on Sanzou. Any occasion you can pull that sort of life lead on an opponent is most likely going to put them into a state of desperation, which is generally favorable for a mixup queen like Kunagi.

Kunagi only has 1 use for meter in her moveset, and that's to add damage to her combos. In most cases, that's only going to be worthwhile if you have them in the corner, where you can get big damage while retaining knockdown okizeme. Best case scenario, you'd always have them cornered, eating mixup after mixup and getting bodied for free, but that's never the real situation. Saving meter for inevitable fuck-ups or good reads on your opponent's behalf is important. Bursting costs 3 bars, which is immense, but meter builds surprisingly fast in this game, so you may find the opportunity to burst out of dangerous situations. Thankfully, if you're utilizing her meterless reversal (623b) and the universal counter from blockstun (B Counter: 6BC in blockstun), you can easily regain momentum if you can keep cool on the defensive. Off of a counterhit 623b, you can even get a hard knockdown and set up for okizeme yourself. So as long as you can keep at least one or two bars in stock at any given time, you have the ablity to consistently maintain the battle's momentum in your favor, whether through big damage corner combos into knockdown oki or reversing the enemies attempts at momentum shifting.

Size CAN make a difference

Although not a huge point, Kunagi is one of the smaller members of the cast, which is a distinct advantage in preventing the use of most character's highest damage combos. Her defense is low, so every advantage you can get on the defensive is an important one. Keep on point during your opponent's combos. They might drop it due to unexpected size difference shit, and you need to be ready to mash that tech out like there's no tomorrow.

Close Range Combo (As of v1.06, this is impossible)

Retrieved from "https://bigbangbeat.fandom.com/wiki/Kunagi?oldid=5013"
Community content is available under CC-BY-SA unless otherwise noted.